Re-reading Along Came a Llama, I came across a passage in particular in this book that I liked, and it has nothing to do with llama's. I recently came across a new Dutch word coined by a writer : "eetlezen", literally "eat-reading", i.e. reading while you eat, which is one of my favourite passtimes.  Ruth and her family like it too:

"Reading was our main relaxation, hobby and perhaps vice. Paul, Beenie and I would read our way through most meals with our books balanced against the Golden Syrup or milk jug. Of course we did not read when we had visitors or at Saturday and Sunday dinner when the children were at home, or indeed in the school holidays. We felt that we should be setting such an appalling example and anyway, with five of us reading at the table, somebody's book or magazine would be sure to find it's way into the butter or the gravy. We confined our reading at meals to the times when there were just the three of us. There wasn't much point in keeping mealtimes for conversation. Mostly we had been working together all day and had had plenty of opportunity to say all we wanted to say."

I do like this. Sunday evening is my "eat-read" night as H. watches Studio Sport (Dutch equivalent of Match of the Day) and I read. 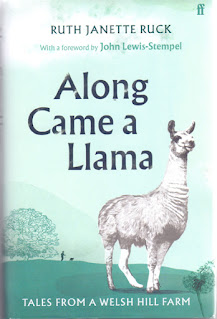 This is Ruth Janette Ruck's third and final book. Although there is a sad beginning there is plenty to smile at in this book. In the 1960's Ruth and her husband Paul move to the cottage of Ty Mawr, a few hundred yards from Carneddi, where her parents and sister Mary (who is very ill) live. In 1966 their daughter Ann is born, followed by a son, John, in 1968. Soon after, Ruth is diagnosed with Multiple sclerosis.  "Soon I decided that it was better to do something useful and feel ill than to nothing and still feel ill. Then, mercifully, I became much better and most of the sight returned to the affected eye (she had become blind in one eye). It was the beginning of a remission that lasted for a couple of years. There were to be other exacerbations but I did my best not to let them affect our lives and we all carried on as well as we could". Little mention is made of MS in the rest of the book.

Paul's sister Jean, known as Beenie, comes to live with them and proves to be a big help. During a short holiday the family visit Knaresborough Zoo, where they get to know a group of llamas.

As a child, Ruth wrote in her notebook "I want a llama" and she suddenly has the feeling that they will have one on their farm.  After her father dies suddenly,  her mother offers to pay for a llama, feeling they need something new and exciting to distract their minds from their father's death and Mary's illness. After another visit to the zoo the deal is struck and some time later 5 month old Annie, as she is called then, arrives in Wales. 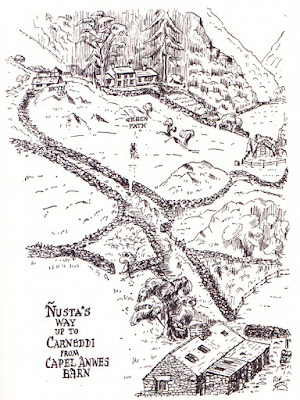 Annie is renamed Ñusta, but often nicknamed The Um, after the noise she makes. She needs some time to settle in. ". . . she was curious about the room and inspected its contents, moving very carefully so as to do no damage. The inspection over, Ñusta moved to the hearth rug and then, as though taking her cue from us, she positioned her feet close together and sat down. She sat calmly and with dignity, like an invited guest - as indeed she was. (...) We were amazed by the extreme domestication of our beautiful animal, and her delicacy, cleanliness and good manners. We felt we had an aristocrat in the family."

In 1975 Ruth's sister Mary, who had been ill so long, dies. "Now my mother demonstrated to us that life must go on whatever sorrows there were. She set to work to rehabilitate her garden which had long been neglected. She had more time for her grandchildren. She took a renewed interest in the farm and pleasure in the llama. We all drew inspiration from her courage and unbreakable spirit."

The llama becomes a much loved pet, who seems to see the family as her herd. As this was a time when llama's were seldom seen in the British countryside many people are baffled when they see her. Nusta is always interested in visitors: "If she were near at hand she would hurry up to inspect them. This inspection was a sort of llama-style interview. She liked to look closely into the face of each person - and her head was now nearly on the level of most humans' - and to touch their hair lightly with her nose. Beards were also of great interest."

Finding information on how best to care for llamas is hard. Books on the subject are rare, and vets are not very familiar with the animal. "Our best authority so far was still Goldsmith's Animated Nature, published two hundred years earlier and written by a man who had, perhaps, never seen an llama."

Ñusta can roam freely around the farm. "During the day she was busy about the farm, taking a llama's eye-view of all the activities and joining in whenever she could. (...) She was aware of the sound of the engine before anyone else could hear it. As I drove up the hill, I could usually see a small white face with dark eyes and long ears peeping inquiringly over the five-foot wall which ran along the crest of the spur. After a long look, the face would disappear and I knew that the Um was rushing along on the other side of the wall, to reach the yard gate at the same time that I did. When I stopped by the garage, a head and a very long neck would come in through the car window and the llama would toot an excited welcome."

The book ends with their decision to have Ñusta mated. For this they travel to Chester Zoo, where there is a small herd of llamas. And strangely this is were Ruth ends this very entertaining and well written tale: we don't know if Ñusta gets pregnant or what happens next.

My edition of this book is a 2020 reprint. Though Ruth thanks someone in the acknowledgements for preparing the photographs, there are none in the book (apart from a vague one on the back flap). 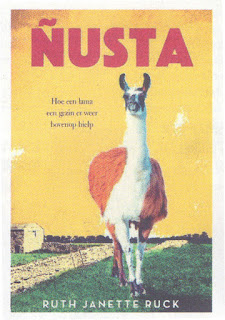 I was surprised to find that this book was recently published in Dutch (as was a translation of Copsford).