Herm, Our Island Home by Jenny Wood (1972, reprinted in 1981 with a new foreword and an additional chapter) 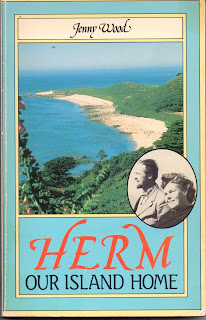 In 1949 Peter and Jenny Wood take on the lease of Herm, one of the small Channel Islands.
When they start out they have two children, while four more are born on the island. They are keen to create a community and Peter’s brother and his wife join them.

From the back flap of my paperback: it is the story of a wife and mother trying to bring up six children in a ruined house on a derelict island, without a proper water supply or drainage and no electricity.
So there is a lot of work to do, including arranging for a phone line with Guernsey to be put in. Before that the only way to seek help in an emergency is to signal with an Aldis lamp.
Jenny writes: milk was no problem as we were plentifully supplied from the farm- with eggs also - and we grew our own vegetables. I would have liked to learn more about that, but the subject does not come up again.

As the lease makes them responsible for the complete upkeep of the island, they need to run it it as business, so they expand the hotel, do up cottages and open a restaurant, cafe and shops.. They also try their hand at making and selling products (souvenirs made of shells, pottery, weaving, daffodils, stamps). For all this they need to employ lots of people, some of whom come to live on the island with their families. They start a small school and employ a teacher.

I must say I found it hard to understand the economics of the whole operation. On the one hand the cost of running the island must have been enormous. On the other they seem to employ people (and their families) on a whim, send their children to boarding schools and spend two months in a hotel in England while their house is being rebuilt.

Another quote from the back flap: to anyone who has ever dreamed of „ getting away from it all” this book is an absolute must. Well maybe, but only if you have loads of money!

I would not say Jenny tells the story of what happened, but that she entertains us with a series of anecdotes (which is why it is hard to get a complete picture of the operation). Most chapters are only a few pages long. I suppose this could be called a charming book: perfectly entertaining and harmless.
But something bothered me about it: Jenny has a curious way of writing about other people’s misfortunes. The tenants of the neighboring island of Jethou suffer some very serious accidents and someone even drowns. Somehow she gives the impression that it is all their own fault: now, I am happy to say, Jethou is in he hands of people who live there quietly and contentedly, and without recourse to such dramatic events.
And then there is Kay, who they employ to look after the children. She suffers from severe asthma and one day has a fatal attack. She dies in Jenny’s arms. This gets two short paragraphs. Next paragraph: Sapper (their dog) also died that summer … we all felt his loss keenly… Ouch!

Peter and Jenny’s daughter Penny and het husband took over the lease in 1980 and ran the island till 2008, when it was taken over by John and Julia Singer. Jenny Wood died in 1991 and Peter in 1998. They are buried on the island.

Starting this blog involves a lot of rereading. At the moment I am reading Herm, our Island Home by Jenny Wood.
I have also ordered some new (well, second hand) books:
The Good Life by Scott and Helen Nearing
A Place in the Woods by Helen Hoover
Tales from our Cornish Island by Evelyn Atkins (sequel to: We Bought an Island)
My New Forest Home by Irene Soper
on February 21, 2021 No comments: 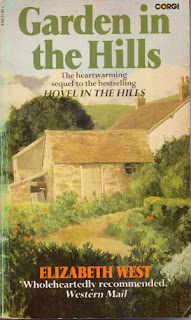 On my first and. so far, only visit to Wales in the late nineties the weather was glorious. I volunteered at the Eisteddfod in Llangollen and cycled round North-Wales (visiting Dorothy Campion’s house en route, but that is another story). I now realize how lucky I was. The weather can be extreme there, especially at 1000 feet and Garden in the Hills can be used as a guide on how to garden at that height. Elizabeth and Allan found advice in gardening books often does not apply so they learned by trial and error and often just by 'what felt right'.

This is the sequel to Hovel in the Hills. It tells the story of how Elizabeth and Allan West made a garden and gives further insight into their life in the hills.
The book includes a map, which is one of the reasons I like it. I have pored over it, trying to place everything that is mentioned in the story. Where is the bluebell forest, and where is the drive? Never mind, I just love maps.
Once again I find that Elizabeth is very good at writing about plants and animals, but not at describing people. The acknowledgments state that she has invented a few characters so that she could describe true incidents without causing embarrassment to real people. Well, I don’t think these real people will have been very pleased to find themselves represented by two nitwit Welsh farmers and a know-it-all retired teacher. Best to forget about them, the rest of the book is a joy to read. 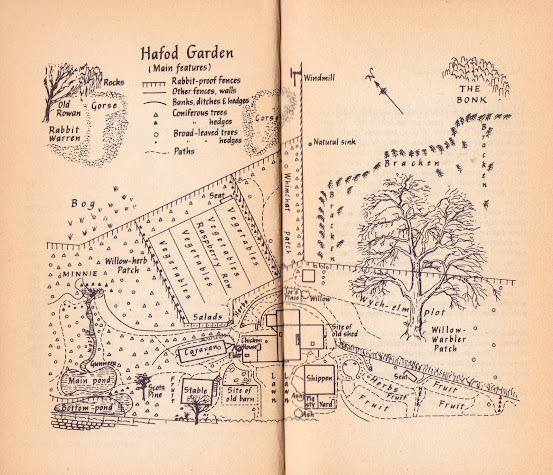 Making a garden around Hafod involved a lot of hard work: clearing the garden, making paths, creating shelter, building fences to keep out rabbits and sheep (not always successful), and building a water garden around the spring that is the cottage’s only source of water. A special chapter is devoted to the long hot summer of 1976, when, at the end of a long dry period, it took 2 hours to fill a bucket at the spring.
There is a chapter on weeds, which can be very useful as ground cover and as pest food (keeping insects away from vegetables). Elizabeth also includes a list of weeds they regularly eat in salads.
Apart from growing fruit and vegetables they also forage, although it was not called that then. They use berries to make jam and wine and gather mushrooms. A list of all the crops grown is included with tips on which varieties to grow. Elizabeth and Alan find that using seed that they have saved themselves works best.
The garden is also filled with trees and flowers, some of which they have planted, some of which just  'happened'.  We bought crocuses and carnations. But who gave us the double snowdrops? Where did the marguerites come from? Those oriental poppies by the shippen?  They also rescue plants from roadworks or building sites.
There is a chapter on manure (which they get from a farmer friend) and the making of compost.
Though the word „ organic” is not used in the book, Elizabeth and Alan are certainly organic gardeners. They find they are not much bothered by pests, because of the wild plants (attractive to insects and birds) surrounding the vegetable garden and because of the healthy balance of predators and prey.
What comes through in the whole book is the joy they both find in their garden, in the butterflies, birds and other animals that are constant visitors.
One of my favourite chapters is on how Elizabeth keeps house. How does she cook (on a wood stove or an a primus stove) and what? She includes menus and recipes.
The books ends on a sad note. On the one hand there is the perpetual problem of earning money. They find they often have to leave Hafod for a few months to earn money elsewhere, but this is getting harder.
Also 'progress' in the form of road widening schemes and traffic is creeping up on them. So Elizabeth and Alan will have to leave Hafod.   But it won’t all be destroyed. Something will remain … In a hundred years’  years time when the cottage is perhaps a ruins, a lone walker coming across the moor may look down from the hillside and see the Hafod woodland, quiet and secluded at the base of the hill. (...) He will see all these things and he will know that in this wild and lonely place, someone once made a garden.

The way Helle keeps house in An Hour by Bus is similar to the situation in The Children Who Lived in a Barn, except that this house has electricity. She does all the laundry by hand, catches fish, grows vegetables and cooks on a wood stove. As for the food, the book gives us a little insight in what Norwegians were eating at the time. On page 52 there is a list of what the girls like or don’t like to eat, on which we find the following dishes: salt fish, fish pudding, raw meat, milk pudding, crab, veal, mutton and apple pie. 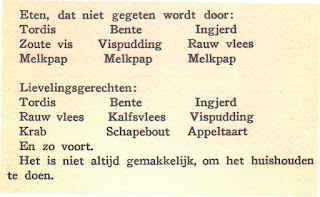 By the way, the list does not include Helle’s likes or dislikes. As she states she is the „ mother” and often has to make do with the leftovers.
on February 02, 2021 No comments: