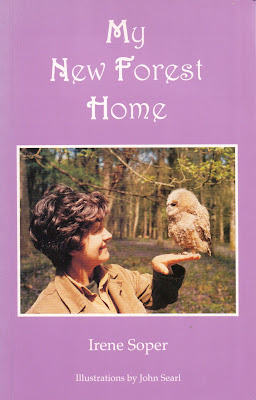 I ordered this book knowing just the title. It turned out to be the story of Irene and her husband Arthur, both artists, who have lived in the New Forest for about 30 years.
The New Forest is one of the largest remaining tracts of unenclosed pasture land, heathland and forest in Southern England, covering southwest Hampshire and southeast Wiltshire. It was proclaimed a royal forest by William the Conqueror, featuring in the Domesday Book. It became a National Park in 2006
Irene and Arthur live in Abbots Well, near Frogham. In their garden is a small cottage, which used to serve as a home, lastly for herbalist and writer Juliette de Bairacli-Levy. They do up this cottage (including re-thatching), which they then use as a studio.
Irene’s garden is surrounded by the forest and is visited by many birds, rabbits, badgers, foxes and stoats.
They become enthusiastic beekeepers. Irene writes that many people in the New Forest used to keep bees, and that at one time it was famed for mead. I knew mead was made with honey, but I had no idea the caps (cut off the honeycombs) and wild comb (pieces of wax made by bees to fill up gaps) were used as well.
This is her mead recipe: Place cappings and pieces of wild comb in a pan, add enough cold soft water or rainwater to cover, and bring to the boil. Simmer gently until the wax rises to the top. Allow to cool. Remove the wax, strain the remaining liquor into a covered vessel. When luke warm stir in one teaspoonful of mead yeast and put in a warm place to ferment. When bubbling has ceased, strain into a cask with air-lock and store for a year before bottling off.

They are also avid badger watchers. First around their house: Arthur even riggs up an alarm system so they know when a badger is entering their garden. Later they go out and discover badger setts and badger watch in the evening. This involves sitting or standing still for long periods dressed in mosquito proof clothing (wellies, leather gloves, net veil over the face).

They delight in exploring the surrounding forest.
Standing on the hill that mooring I realized just how much there was to explore - the Forest around Abbots Well offered great variety. There was open moorland with large stretches of furze (or gorse) and heather where many species of birds were to be seen and which gave cover to several foxes’ earths. There were wooden enclosures where badgers had their setts and deer grazed peacefuly beneath the shade of the leafy branches. Peat-stained streams meander their way through wooded glades and open moorland, here and there opening out to deep pools where small brown trout would lie. Treacherous bogs were numerous, deceptive in beauty with bright green moss, colorful flowers and rushes.
While searching for mushrooms they often come across fragments of Roman pottery. In certain places there is so much that moles throw it up when they dig and it can be found on top of their mounds.

The New Forest is famous for its ponies: Probably the picture which comes to mind at the mention of the New Forest is that of ponies. They appear on postcards and calendars and are the subject of very tourist’s snapshot. As they are running free the give the impression of being wild but each one has an owner and carries a brand-mark to prove it.
Spring is perhaps one of the best times for the ponies as they can enjoy the sunshine without the tormenting flies which come with the summer. In spring too the new foals arrive. It is always interesting to watch the mares leave the village in the evenings and make their way up Hampton Rudge to the open Forest where they spend the night, and to see them return again in the morning with perhaps a new foal born overnight running with them.

The Forest has many products to offer in one way or another: From olden times to this day the forester has taken advantage of this and turned them to good use. Apart from food, rabbits, hares, wild berries and fungi, which were all available to the peasant, there were materials such as heather, bracken, timber and peat.

Irene ends the book with tips for making a potpourri of forest finds to capture a tiny bit of the Forest to last you through the winter, using gorse petals, golden bracken, seeds, catkins, nuts, lichen, larch cones, pine needles,wood chippings, sloes, rose hips and bark.

I have not been able to find any information on Irene or Arthur Soper. The publisher (Ex Libris Press in Bradford on Avon) still exists, so I plan to contact them. Irene also wrote a cookbook: New Forest Cookery (1983).
Juliette de Bairacli-Levy wrote many books, among them Wanderers of the New Forest (1958).
on June 13, 2021